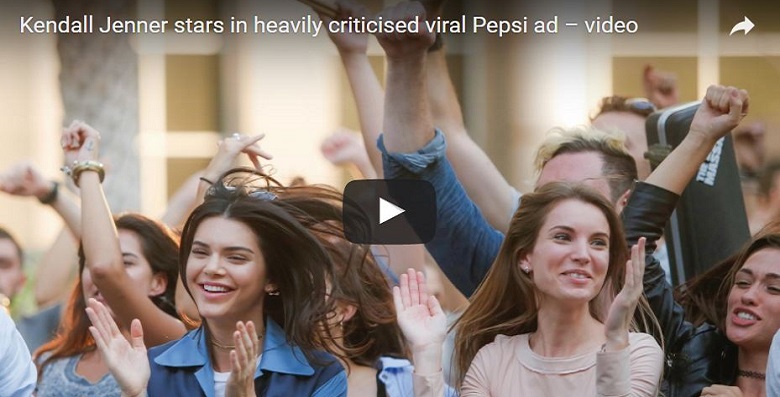 You will have struggled to miss recent coverage surrounding the most embarrassing high profile brand ad catastrophe in recent times. Pepsi, eager to try and galvanise a young and politically charged audience, produced what can be described – at best – as a misguided advert, which had the opposite of the desired effect. The clip – in which a protest confusingly turns into something of a dance festival and Kendall Jenner appears to successfully appease police officers with cans of soft drink – was launched, ridiculed and pulled from the air within a day.

It received scathing reviews, with some posing the argument that borrowing imagery from the Black Lives Matter movement trivialized the widespread protests against the killings of black people by the police. If you have the time, this 8 min+ clip on the Young Turks YouTube Channel dissects the ad and the criticism that followed:

So what was so bad about this ad campaign?

I mean, where do you start? It really sucked – and not just for the obvious reasons like the fact that it was pulled, the money used to create it was wasted and that it received mass criticism. The failure of this ad points to more fundamental issues that you can learn from when developing campaigns, these include;

It shows that (some) brands still think they know best

This advert shows that Pepsi still think that they can put their finger on the pulse regarding a main topic or issue and use it to position their brand effectively. That’s just not the case anymore, and arguably it never was. If you’re going to align your brand to a major topic, with such controversy attached, it might be a good idea to genuinely understand the sensitivities surrounding it and, even better, ask your target audience what they think of that issue and form your plans to align with it accordingly.

Like under-committing to a 50/50 challenge in football, Pepsi managed to damage themselves by almost being bold, but not quite getting there. Had they truly and whole-heartedly aligned themselves with a cause, of course there would have been both support and criticism, there always is when brands align to cases. The difference would have been that the criticism will have been Pepsi’s choice and they could manage that risk. Using the light touch approach they chose, combined with poor execution, mean Pepsi not only confused their audience as to what message they were trying to convey, but also lost the audience they were trying to win over.

Kendall Jenner could be a fantastic brand ambassador for most brands. She’s got an immense social media following (88m followers on Instagram alone), and brands are falling head over heels to align themselves with her personal brand. But Pepsi were lazy with this one, from start to finish. Because they didn’t fully understand what they wanted to tell their audience because of lazy planning, they chose a big name, without really thinking about whether there was a ‘fit’ with their core message. If they were, as the company said in a statement in the New York Times apologising for the Ad ‘trying to project a global message of unity, peace and understanding’, then is Kendall Jenner really the best they could come up with?

The issues above boil down to three key learning points, summarised as;